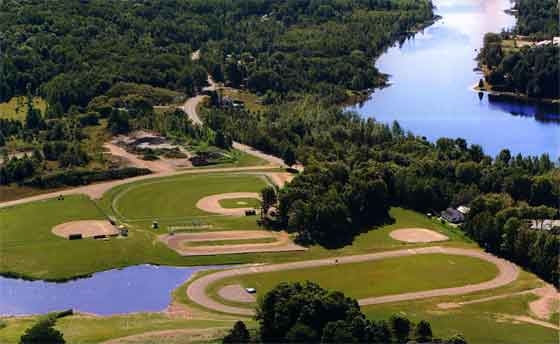 Ellsworth is a village in Antrim Countyin the U.S. state of Michigan. The population was 483 at the 2000 census. The village is primarily a bedroom community with its primary industry being graveland other aggregates. Agriculture and forestry are also important industries.

The Village of Ellsworth was founded in 1881 by Erwin A. Dean and his nephew, August Davis. Lewis A. DeLine became its first postmaster on February 1, 1884. The new village and post office included the small settlements of Needmore and Ox Bow. Named by Mr. DeLine who had served under Colonel Elmer Ephraim Ellsworth, the first Union officer to die in the American Civil War. The village was named after Elmer.

Down the street is a bistro called "The Rowe Inn". Ellsworth is the seat of Banks Township, which also includes the community of Atwood and several  cherry orchards. Ellsworth's main governing body is the Ellsworth Village Council.

The Wooden Shoe Campground
Overlooks Ellsworth Lake which is connected to Chain of Lakes. Great
swimming, beach, boat launch, pavilion, good fishing with fish cleaning station is right in front of the campround at the Ellsworth River Park. Camping can be reserved from May 15 thru Sept. 15.
Amenities: 45 large sites with water & elec. Cable TV and high-speed wireless internet are available.
• 7 tent sites with picnic tables and fire rings.
• Dumpstation, on-site 24-hour management, private showers, restrooms.
• $20 a night per site.
For reservations call the campground at
(231) 588-3382  woodenshoepark@hotmail.com

Activities and Contests Include:
Lighting of the Christmas Tree • Arrival of Santa
Gifts & Refreshments provided • Pictures with Santa will be available
Winners of decorating contest will be announced.
Entries from outside the village must get entry form at any local business

There were 174 households out of which 43.1% had children under the age of 18 living with them, 61.5% were married couplesliving together, 10.3% had a female householder with no husband present, and 24.1% were non-families. 20.7% of all households were made up of individuals and 11.5% had someone living alone who was 65 years of age or older. The average household size was 2.78 and the average family size was 3.17.